America’s First Gay President (That We Know Of) 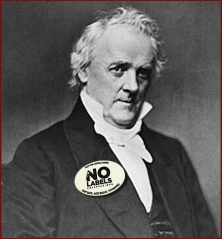 No, I’m not referring to some promising up and coming politician. Sorry to disappoint, but Hillary is probably the closest you’ll get to a lesbian in the next presidential race. And no, I’m not talking about those scandalous gay rumors surrounding Abe Lincoln. Let’s go one stop further back in time on the presidential subway train.

James Buchanan was the United States of America’s 15th president. He’s also the only American president to remain a bachelor throughout his life. No, being a lifelong bachelor doesn’t make you a homosexual, but living with your boyfriend for over a decade does.

That’s right folks, the 15th president, elected in 1856, was living in hot, steamy, homosexual sin. Looking like Anthony Hopkins’ older and more sour brother, he may not be much to look at, but give him a break – manscaping and 24-hour gyms weren’t around yet! 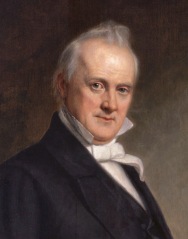 Perhaps the President would enjoy a nice chianti?

Next time you drop a 20 at the store, keep in mind that the homophobe on your bill once referred to Buchanan and King as Miss Nancy and Aunt Fancy (in case you didn’t know, Miss Nancy is a 19th century term for an effeminate man). But I should note that United States Postmaster General Aaron V. Brown was a bit more open-minded, referring to King as Buchanan’s “better half”.

The king to President Buchanan’s queen, circa 1839.

Obviously President Buchanan never officially came out of the closet. That simply just didn’t happen back then. However, he didn’t seem to go to too much trouble to hide his lifestyle. He was engaged briefly to a woman, Anne Coleman, when he was young, but the two never married and he never courted another woman. However, in 1844, while King was in France, Buchanan wrote in a letter to Cornelia Roosevelt saying that he was lonely and had “gone a wooing to several gentleman, but [had] not succeeded with any one of them.”

Of course, all of this is glossing over the fact that many blame Buchanan’s lack of action during his presidency for leading to the Civil War, but we’re talking about his sexuality, not his political prowess.

President Buchanan (standing, center) having a gay ol’ time with his cabinet circa 1859.

Homosexuality isn’t new. We’ve walked amongst you since the beginning of time. Occasionally, history even put us in positions of power. And really, if you can’t take a cock like a man, you have no business being president. Just ask James Buchanan.