Nothing is hotter than a hunky heterosexual man comfortable enough with his own masculinity to portray gay characters for all to see. Since women can’t have all the fun, we’ve ranked the top 10 actors we wish would switch teams, like some of the characters they’ve portrayed. We didn’t count actors who’ve already hopped on the coming-out-of-the-closet train, like Zachary Quinto, actors who’ve had gay rumors surrounding them since before they were famous (we’re looking at you Bradley Cooper), or actors with both a literal and metaphorical beard, like Hugh Jackman. Here are the ten sexiest guys who’ve convinced us they prefer the peen.

Kerr Smith may not be the most recognizable name on our list, but he has the honor of being one half of the first gay male kiss ever on prime time television. Many viewers had mixed feelings when Jack McPhee was outed on Dawson’s Creek. On the plus side, it gave Katie Holmes great practice at being in a relationship with someone who wasn’t sexually interested in her. These days Kerr is more of a silver daddy, but thanks to Netflix, all it takes is one click to relive his boyish days. I don’t wanna wait for Kerr Smith to play another gay role, I just want to relive that one.

Franco took from his role in Milk for Bound 3. Courtesy IMDB.

With all of his weird shenanigans and stunts, it’s easy to forget that James Franco is actually pretty hot. He donned an unfortunate perm to play Harvey Milk’s lover, Scott, in Milk, but he still managed to bring the sex appeal. James has offered a lot of support to the gay community, some of which was even coherent, and has even said he wishes he was gay. Well James, you know what they say – practice makes perfect.

8. Jude Law (Midnight in the Garden of Good and Evil, Wilde, Rage)

We sat through Cold Mountain AND AI for you, Jude. We think you owe us.

His hairline has fallen victim to time, but Jude Law’s youthful beauty will forever be captured on film. He’s beyond swoon-worthy as Oscar Wilde’s young lover, Lord Alfred “Bosie” Douglas. It’s easy to see why Wilde was obsessed with him. I know there was at least one adolescent boy who made a habit out of pausing the aforementioned film at just the right moment to… fully appreciate all of Jude Law.

Will Boyd and Raylon ever lay down their guns and find love? Justified returns to FX January 7th.

Before he was Justified, Timothy Olyphant was busy locking lips with former teen heartthrob Andrew Keegan in The Broken Hearts Club. He was Olyphantastic as a gay leading man. In a film that was filled with clichés, he offered a portrayal of a gay man that was only marginally stereotypical. The movie may be a little corny, but it’s actually a fairly accurate depiction of gay friends, at least compared to most of the other gay movies out there. Oh, and Dean Cain plays his best friend.

We could sit through an Insidious 3… as long as you take your shirt off. Courtesy Vada Magazine.

Patrick Wilson was virtually unknown when he starred with Meryl Streep and Al Pacino in HBO’s adaptation of Angels in America. He may not have been keeping Mary Louise Parker happy, but I think just about any gay man would enjoy Patrick Wilson coming home to them after a day of hard work. With his chiseled good looks and boy next door charm, Patrick has been making both men and women weak in the knees for over a decade now. No one bought it when his character had sex with Lena Dunham on Girls, but no one seemed to have a problem with his tongue down a guy’s throat. That seems fair.

He may not be as talented as his better half in the most successful gay romance of all time (RIP Heath Ledger), but Jake Gyllenhaal was definitely the pretty one. Jake, your string of crappy movies lately makes us wish we could quit you, but we’re holding out hope you’ll find your way back to men and better roles again. Here’s an idea – Brokeback 2, in which your character is resurrected in modern times and gets a job working as an underwear model. They’ve got my $13! 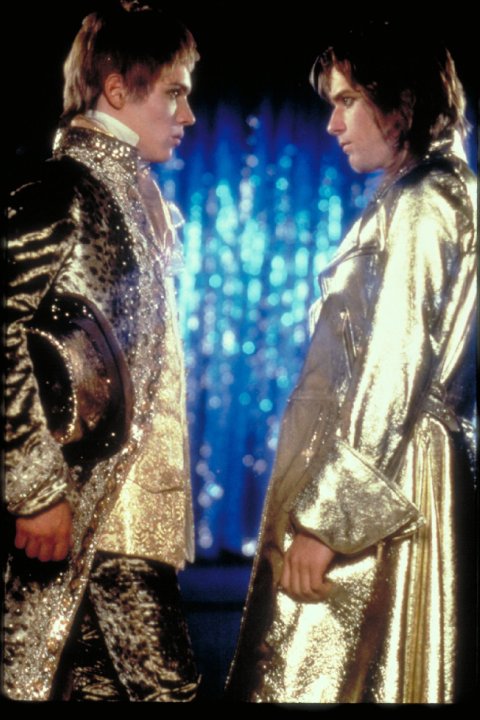 Little known fact: Velvet Goldmine was a prequel to Behind the Candelabra. Courtesy IMDB.

Is there any other actor who approaches sexuality with such fearlessness as Ewan McGregor? Whether it involves full frontal nudity or graphic sex scenes, he’s game. The amazing thing is that, as brave as he is, these films are generally of a higher quality than similar films. Velvet Goldmine is one of the best films for a sexually confused adolescent and it stars not one, but three sexy leading men playing gay. Christian Bale and Jonathan Rhys Meyers both had more screen time and almost made this list, but it was Ewan’s Curt Wild that you found yourself dreaming about as you drifted off to sleep. 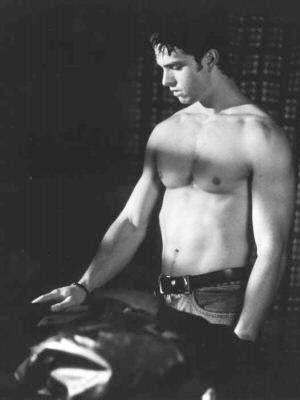 The aliens were a metaphor.

If you’ve seen Rites of Passage, you get a cookie. Most of you probably remember Jason Behr from his years on Roswell or his unfortunate turn as Sarah Michelle Gellar’s boyfriend in The Grudge, but he played gay early in his career. Rites of Passage is the sort of movie you may have caught at a random time on one of the HBO or Cinemax channels, or bought off the $1 rack at Wal-mart. The movie aside, we just really wish Jason Behr would give men another try. At this point, it could only help his career. Important note to Mr. Behr: You don’t need to be the lead in a project for it to further your career. Take a supporting role!

Time to turn our Jax/Opie slash fiction into a screenplay? Courtesy People.

Most people know him as the super masculine Jax Teller on Sons of Anarchy, but it was actually his role as twink Nathan Maloney in Queer as Folk that helped him break out. That’s right, the star of one of the most rugged, manly shows played a fairy. Of course, he’s bulked up a bit since then and has donned a series of unfortunate facial hairstyles, but he’s always been dreamy. Don’t expect him to play gay again any time soon as he’s busy climbing his way to become one of Hollywood’s hottest leading men. Random thought – whose idea was it to jump the show forward while the characters were in prison? Who the hell do they think they are cheating us out of gay prison sex? 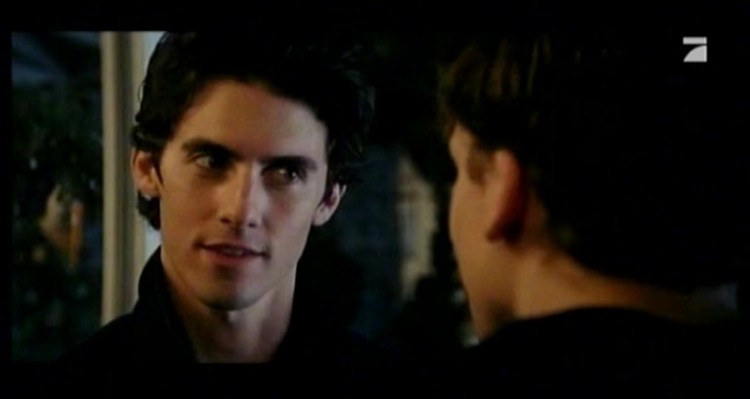 Great things can come in small packages. And also appear on Gilmore Girls. Where my Jean shippers at?

Before flying into our hearts as Peter Petrelli in Heroes, Milo Ventimiglia was already earning himself quite the gay following. He’s always been very appreciative of his gay fans and says it was actually two gay young men who first recognized him when he was just starting out. Like the other men on our list, Milo has grown older since he last played gay, but you wouldn’t know it by looking at him. He seems to only get sexier with each passing year. Someone please write this guy a steamy gay romance NOW. And Milo, take a page from our Number 4 when it comes to full frontal, m’kay? Thanks.

Don’t agree with our rankings? Can’t believe we forgot your favorite actor? Sound off in the comments! Not into dudes? Check out our Top Ten Gay-Playing Actresses We Wish Weren’t So Straight.