Uganda’s parliament passed an anti-homosexuality bill on Friday that could sentence citizens convicted of “aggravated homosexuality” to life imprisonment, said Helen Kawesa, a spokesperson for Uganda’s parliament. The promotion of homosexuality is also banned by the bill, and you can also be imprisoned for not reporting gay people. As originally reported by the Associated Press, the new law does not include the death penalty, which was part of the draft legislation that was first introduced in 2010. 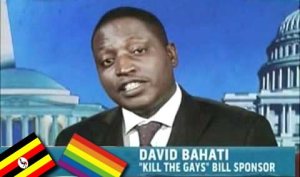 Don’t you just want to kick this face?

Homosexuality was already illegal in Uganda, but lawmakers argued that stricter laws were needed because western homosexuals posed a threat to Ugandan families. They also accused western gays of trying to recruit Ugandan children into the gay lifestyle. That makes complete sense. We have been known to do that.

“This is a victory for Uganda. I am glad the parliament has voted against evil,” David Bahati, the MP behind the bill and general bigot, told the AFP news agency. In 2011, one gay activist was killed and a Ugandan newspaper recently published the names and addresses of suspected homosexuals.

According to the BBC’s Catherine Byaruhanga, the government is prepared for international backlash and expects some countries to suspend aid to Uganda. President Yoweri Museveni still needs to sign the bill into law, so it’s still possible, though unlikely, that he will reject it.

Why should this matter to you? Foreigners are not excluded from Uganda’s anti-homosexuality laws. Bernard Randall, a retired British man, faces up to two years in prison after being charged with possessing a gay sex video that was found on his computer by thieves. Even though Uganda is such a trendy vacation destination, you might want to think twice about visiting.

Know your rights before you travel.

Homosexuals shouldn’t take it too personally. Uganda is ridiculously conservative and just this past Thursday passed an Anti-Pornography Bill, which bans not only pornography, but also “suggestive material” such as certain music videos, not to mention miniskirts. If you’re a lesbian with a penchant for miniskirts, Uganda is NOT the place for you.