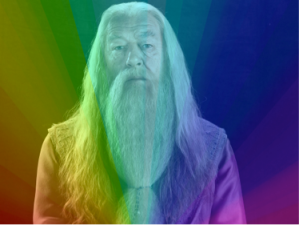 Dumbledore, of J.K. Rowling’s Harry Potter, is quite the man of mystery. Little was said about Dumbledore’s private life in her seven magical books. Rowling left us “potterheads” filled with curiosity about everyone’s favorite headmaster. 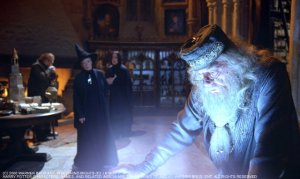 After being asked about Dumbledore’s hidden love life, J.K. Rowling replied, “My truthful answer to you: I always thought of Dumbledore as gay.” She further revealed that Grindelwald was Dumbledore’s lover because of their intellectual similarities. This gives a whole new meaning to the infamous “Elder Wand” if you know what I mean.

To be honest, none of us can really be surprised. No straight wizard could make floor length robes look so fierce. 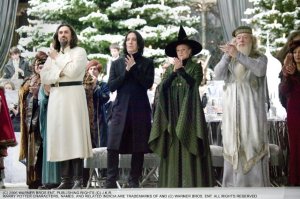 Here he is modeling the spring collection. Courtesy IMDb

While many have criticized Rowling for undermining LGBTQ progress by failing to mention that Dumbledore was gay, I think, if anything, it aided the growth of gay acceptance. It’s nice to see a gay character that isn’t all about being gay. Often, LGBT characters in the media are portrayed as stereotypes whose lives revolve around their apparent gayness. It’s refreshing to see a character whose sexuality is only a small detail of their life. It leaves more room for the magic stuff!

Afterwards, J.K. remarked, “If I had known this would have made you this happy, I would have announced it years ago.” Yes, it does make us happy. Quite gay, in fact!

Talk about a flamer… Courtesy IMDb