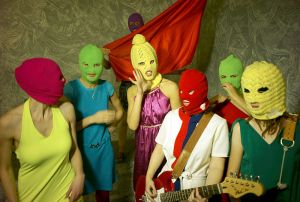 Even if you didn’t know the feminist group from their protesting performance art, you’ve probably heard about the imprisonment of three of the group’s members for “hooliganism”. Now that Nadezhda Tolokonnikova, 24, and Maria Alyokhina,25, have been released (Yekaterina Samutsevich, 31, having been freed on probation in October), they are calling for a boycott of the 2014 Winter Olympics, to be held in Sochi, a Black Sea resort in Russia.

Tolokonnikova said their Friday release was an effort to improve Russia’s image before the Winter Games begin in February, as originally reported by Reuters. Russia’s federal laws on “the promotion of homosexuality” that passed on July 30, 2013 have been the subject of heated debate in western countries. Amnesty International and celebrities such as Madonna, Tori Amos and Sting have criticized the Russian government for the arrest of the Pussy Riot members. “With the Olympics approaching, Vladimir Vladimirovich (Putin) does not want his favorite project ruined,” Tolokonnikova said. “The thaw has nothing to do with humanism. The authorities only did this under pressure from both Russian and Western society.” Tolokonnikova also added that she’s concerned there will be more repression after the Olympics end. 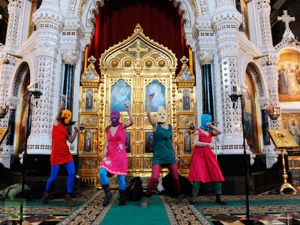 Pussy Riot protesting in the church.

On February 21, 2012, Pussy Riot protested the re-election of Putin inside the Cathedral of Christ the Savior of the Russian Orthodox. Putin has long been linked to the Russian Orthodox Church and Alyokhina believes the church played a role in their imprisonment, as the church considers their protest an attack on Russia’s main faith.

To put things into perspective, Russia is one of the most homophobic countries in the world. Consensual sex between partners of the same gender was only decriminalized in 1993.  Gay marriage and civil unions are not allowed in Russia. There are no anti-discrimination laws with regard to gender identity or sexual orientation. It wasn’t until 1999 that homosexuality was declassified as a mental illness in Russia. In a 2013 survey, 22% of Russians believed gay people should be forced to undergo treatment, 16% said they believed homosexuals should be isolated from society, and 5% said gays should be “liquidated”.  The recent riots are only a demonstration of the ongoing struggle that has been taking place for years. 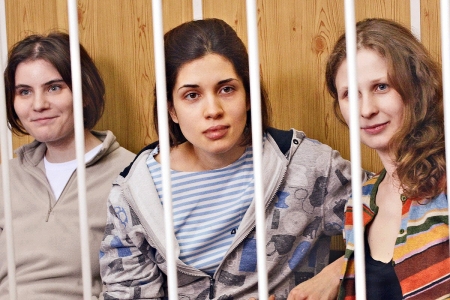 Tolokonnikova has a valid point. The Olympics are a huge event that billions of people tune in to see. Realistically, the political climate in Russia will not stop most people from enjoying the Winter Games, but remember what you’re really supporting by watching. Of course you want to root for your country to win and you shouldn’t be deprived of that experience, but what’s more important – your favorite athlete winning a gold medal? Or human rights?

Like Loading...
« Dumbledore: The Unsung Gay Hero of Harry Potter
An Open Letter to Parents of Just Out Children »