Now that’s the look of a man with a delightful secret!

The star quarterback of the Green Bay Packers likes to pack it in a tight end, according to an unnamed source. It’s alleged that Rodgers engaged in a  romantic relationship with Kevin Lanflisi, Rodger’s roommate, personal assistant, and self-proclaimed Justin Bieber fan. Well well, hunky Mr. Rodgers, welcome to the gayborhood!

A spy wrote to The Fame Driven:

I’m surprised you all haven’t touched on The Green Bay Packers star quarterback Aaron Rodgers and his former male “personal assistant”/roommate name Kevin Lanflisi. Aaron has attended numerous sports award shows with Kevin, always color coordinated and without any double female dates, including the ESPY’s. Kevin was also the first person Aaron embraced when the Packers won the Super-bowl in 2011. I just find it really strange that as of late there has been many bitter subliminal tweets on Kevin Lanflisi’s twitter alluding to a relationship much deeper than a friendship he had, with who I perceive to be Aaron Rodgers, because Kevin has NEVER once tweeted about having a girlfriend, just mainly about the Green Bay Packers, Aaron Rodgers, and Justin Bieber’s music and sitting front row at Bieber’s concert. There has been speculation for years here in Wisconsin that Aaron is gay which I always brushed off, but after looking at Kevin’s twitter I’m inclined to believe Aaron and Kevin were more than just roommates/friends, I believe they were lovers. What do you think?

Do best friends tweet at each other constantly? Maybe. However, when it comes to two heterosexual friends, one doesn’t usually sound like a giddy queen. 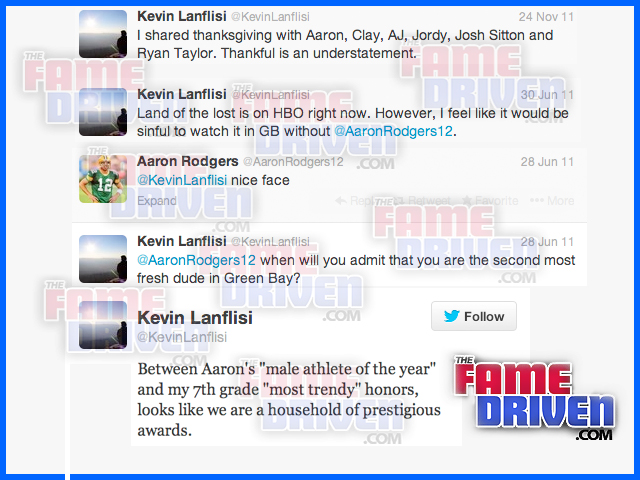 Jacking off wouldn’t be the same without you, bro.

Both Rodgers and Lanflisi are devout Christians, so some may find it hard to believe they had a homosexual relationship together, but the evidence is staggering. Why would one of the most successful quarterbacks of all time need a roommate? Do you know what kind of rich people do that? Queen Latifah, and she isn’t fooling anyone either.

Lanflisi even tweeted this pic of him wearing Rodger’s MVP ring, saying “Looks good on my skinny fingers.”

Things also went sour via twitter. It’s clear that Lanflisi is upset about an ex-lover. He’s complaining LIKE a woman. It in no way sounds like he’s complaining ABOUT a woman. Also, anyone who takes one look at Lanflisi and doesn’t immediately peg him as a bottom needs to adjust their gaydar. Rumor has it that Rodgers was supposed to come out of the closet over the summer, but chickened out at the last minute, which upset Lanflisi. It must be a lot of work pretending to be straight and going golfing with heterosexuals who don’t know how to color coordinate their prints as well as you.

Rodgers just turned 30, which means, as an athlete, he should already be dating a model who’s well on her way to a baby bump. Instead, he prefers to kick it with Lanflisi and watch Land of the Lost. Because that makes sense.

We’ll have more on this story as it develops. Check back for updates.

Mentoring must be code for pounding.

UPDATE: Rodgers has officially denied the rumors that he is gay, and attempts to prove it by sporting a manly mustache. “I’m just going to say I’m not gay. I really, really like women,” he says. Well, that clears everything up then, because a gay man has never said that before. “There’s always going to be silly stuff out there in the media and you can’t worry too much about it. I don’t,” he says. “I think professional is professional and personal is personal and that’s how I’m going to keep it.” Spoken like a man with something to hide! In that spirit, we have compiled a list to help Rodgers with the next phase of his life.