It looks like Ricky Martin is back to livin’ la vida loca. Helga Garcia, Martin’s spokesperson, has confirmed the hunky musician has split from his longtime economist boyfriend. 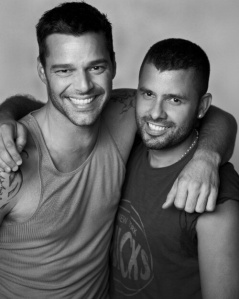 Ricky and Carlos in happier times.

Martin, who turned 42 on Dec. 24th, has only been publicly out as a gay man since 2010, when he came out via a statement on his website. He’d announced he was in a relationship, but it wasn’t until his acceptance speech in 2011 at the 22nd GLAAD Media Awards that he publicly thanked and identified Abella. “Everything about saying that I am gay feels right,” Martin said in an interview on Larry King Live. “If I’d known how good it was going to feel, I would have done it ten years ago.”

No reason has been given for the split, but Martin had a series of cryptic tweets last week that suggested things were a bit rocky. On Christmas, Martin tweeted “Just because the lesson comes from someone you love, does not mean it is correct.” Two days later, another tweet followed stating “Changes oh changes.”

Martin is the father of twin boys, Mattea and Valentino, who were birthed by a surrogate in 2008. There hasn’t been any word on whether or not Abella will continue to play a role in the twins’ lives.