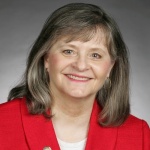 Not everyone is excited about Oklahoma’s unexpected, but much-needed, ruling that the state’s gay marriage ban was unconstitutional. Conservatives  have gotten themselves in a tizzy over the recent decision.

Oklahoma State Rep. Sally Kern continues to demonstrate her hatred for the gay community. “Homosexuality is not a civil right, it’s a human wrong,” Kern said in an interview with a local news channel. Kern is no stranger to controversy.  In 2008 she was infamously quoted for saying “the homosexual agenda is just destroying this nation.”

That outfit is a human wrong, Sally.

James Williamson, author of Oklahoma’s anti-gay marriage constitutional amendment, agrees with her. “I was obviously disappointed, but not totall. “The federal courts have always taken a much more activist view of the constitution and so that was always a risk that they were going to see that.”

“Homosexuals are saying ‘this is who we are. This is how we’re born.’ You tell a lie long enough, people start to believe it,” Kern said.  Just like people believed you were a credible  politician because you told them enough, Sally.

“Many people are very disappointed that states don’t have the right to decide such basic fundamental issues, like who should be allowed to marry,” said Williamson. “I think what we did was the right thing back then and it’s the right thing right now.”

Someone’s always going to be a wet blanket. Unfortunately for gays in Oklahoma, this backlash is likely to cause a delay in the marriage commencements. According to reports, the ruling is expected to face opposition in court.