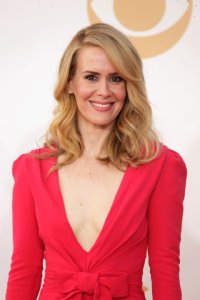 Sarah Paulson has just signed on to star in Carol, directed by Todd Haynes and based on Patricia Highsmith’s novel, The Price of Salt. Carol is set in 1950s New York and tells the story of an ambitious department-store clerk who falls in love with an older, married woman (the great Cate Blanchett). Todd Haynes is no stranger to gay characters, having previously helmed the fantastic Velvet Goldmine. Paulson will portray the role of Abby, Blanchett’s close friend and former lover, as originally reported in Variety.

Most people know Paulson as a regular fixture on FX’s American Horror Story and she was also recently in awards-bait 12 Years a Slave. She may be one of America’s most-eligible lesbians, but we’ve only gotten to see Paulson play a lady-lover on screen a handful of times. Here’s hoping we get some steamy flashback scenes between Paulson and Blanchett. Unfortunately, Rooney Mara is co-starring alongside Blanchett. Hopefully the camera spends more time focused on Blanchett and less time on the emotionless heiress.

Blanchett and Haynes previously worked together on 2007’s I’m Not There.