President Obama Says “Gay” More Than Any Other President

The Human Rights Campaign, the largest gay rights group in the United States, has done a study of the use of the word “gay” by recent presidents and has found that our current president is well-ahead of his predecessors.

The analysis reveals that President Barack Obama has used the word “gay” in public speeches, statements, and proclamations at least 272 times. While speaking in public, he’s also used the word lesbian at least 88 times, “transgender” at least 33 times, and “bisexual” at least 28 times. There also 62 instances of him using the word “gay” on the 2012 campaign trail (Mitt Romney only said it once and it was in the context of excluding same-sex couples from marriage).

Why does any of this matter? Putting the words out there that previous presidents have been too afraid to say has a big impact on our society. Not only does the increased usage reflect our more modern times, but it also sets an example for people to follow. The number of Americans who support marriage equality rose from 40% in 2008 to 55% by 2013.

Jimmy Carter was the first president to tackle the subject of gay rights and his administration even met with gay activists. Bill Clinton oversaw the passage of “Don’t Ask, Don’t Tell” and introduced the Hate Crimes Prevention Act, which was signed into law by President Obama in 2009. However, Clinton also signed the Defense of Marriage Act into law in 1996. Hey, he’s no Hillary. 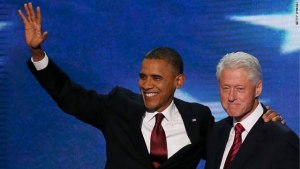 President Obama is all “Watch how it’s done, Bill.”

The political implications are tremendous. The LGBT community can no longer be ignored and must be appealed to in order to win elections. Even members of the Republican Party are now speaking out in support of gay marriage. Whether politicians are actually coming around on these causes or just changing their public views to garner support is unclear, but the cause isn’t as important as the result. Whatever the reason, LGBT rights has become an often discussed topic and bringing the discussion into the public forum prevents people from turning a blind eye.

We’re still probably not going to see an openly gay president any time soon, but seeing politics progress in the right direction gives hope. Some thought they would never see an African American or woman as president either, but look where we are. Here’s to breaking down more barriers in 2016!

Like Loading...
« Azeri Gay Rights Activist Commits Suicide
Russian Prime Minister: ‘No Problem at All’ — Have a Coke & a Smile »