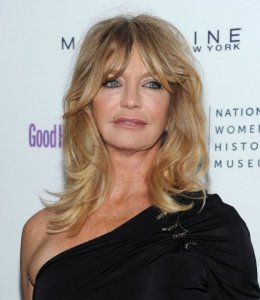 Actress Goldie Hawn sparked controversy when she tweeted a photo of herself with Goodluck Jonathan, the president of Nigeria who is responsible for an onslaught of new anti-gay laws. The caption with the photo stated “Met the wonderful President of Nigeria.” Hawn sat down with HuffPost Live at Davos on Saturday to clear up the debacle.

“First of all, it had every right to cause an uproar. I had no idea,” Hawn said, adding that she had been so busy traveling and finishing her book that she hadn’t been following the news. Hawn said her ignorance isn’t an excuse and that she was appalled when she learned of President Jonathan’s anti-gay stance.

Hawn immediately deleted the tweet upon learning of Jonathan’s views and apologized to her Twitter followers. She called Nigeria’s anti-gay laws “very fear-based” and “full of hatred.” “It’s more than ridiculous; it’s barbaric,” she said.

Hawn was very troubled to learn that people that she supported Jonathan’s cause. “This has nothing to do with my philosophy,” Hawn said. “It breaks my heart because I have my own personal feelings about this. This is man’s inhumanity to man of the first order.”

Hawn added that she believes the equal rights for gays is inevitable. “It’s going to happen,” she said.

We forgive you, Goldie. But still, as penance, what do you say you get started on a sequel to The First Wives Club?

Like Loading...
« Russian Prime Minister: ‘No Problem at All’ — Have a Coke & a Smile
Oklahoma’s Rep. Mike Turner Proposes Total Marriage Ban »