Thanks to shows like Queer as Folk, The L Word, Modern Family and Glee, gay characters are not terribly difficult to find when you turn on the television. It’s great to see more diversity on T.V., but what about all of those shows that are unintentionally gay?

How is a show unintentionally gay, you ask? It’s pretty simple, actually. We’re referring to any show that gives off a gay vibe, where the characters seem at least a little bit gay, but it is clearly not meant to be the case. A lot of shows demonstrate this on occasion, but some really go to the extreme. Here are our top examples of television shows with “straight” characters who might need to come out of the closet…

No, we’re not including this show just because it’s about two strong police detectives. We’re including it because it was so unintentionally gay it resulted in the firing of one of the show’s stars. Loretta Swift played the role of Christine Cagney in the TV movie version, but her contract with M*A*S*H prevented her from playing the role in the series, so Meg Foster was brought in as a replacement. CBS felt that Foster was portraying the role as a lesbian and demanded executive producer Barney Rosenzweig replace her. So Foster was out and Sharon Gless was in, who somehow seemed more heterosexual? Rosenzweig went on to marry Gless and the two rode into the hetero sunset. Don’t shed too many tears for Meg Foster though; these days she can be found hanging with the hot teenage lesbians on ABC Family.

Any second they’ll be busting out the handcuffs and ripping off their tops.

How can a show called My Two Dads not be intentionally gay? Well, it was the 80s and the show was about a teenager going to live with two men after her mother dies, both of whom could be her biological father. Apparently her mother was dating them both around the same time and wasn’t sure who the father was. So Nicole (Staci Keanan) lives with both square Michael (Paul Reiser) and wild Joey (Greg Evigan). It premiered the same year as Full House and 3 Men and a Baby was released. The 80s was a weird time where people seemed to think the best parenting was done by a wacky mismatch of “heterosexual” men. This still happens today. We call it gay parenting. 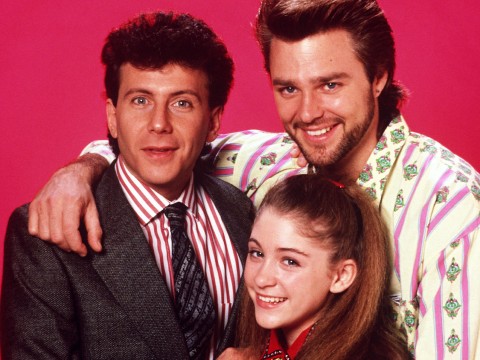 Just because the shirt looks like something Cam would wear on Modern Family doesn’t mean they’re gay!

Just about everyone remembers Full House, which starred Bob Saget, John Stamos and Dave Coulier as the caregivers of the Olsen twins, a future meth addict, and a born again Christian. While the three male leads all had women in their lives at some point in the series, only Uncle Jesse (Stamos) actually tied the knot and started his own family. Let’s be honest, if Uncle Jesse didn’t show up in the pilot, Danny (Saget) and Joey (Coulier) would probably have been sharing the master bedroom. Danny had a long-term girlfriend named Vicki and Joey had… a woodchuck, neither of which were very convincing beards. The show ran for 8 seasons, but we never did get that wedding. Random thought – why isn’t Kimmy Gibbler on anything these days? She was the best! Revive the character as a lesbian mom and you’ve got a sitcom! 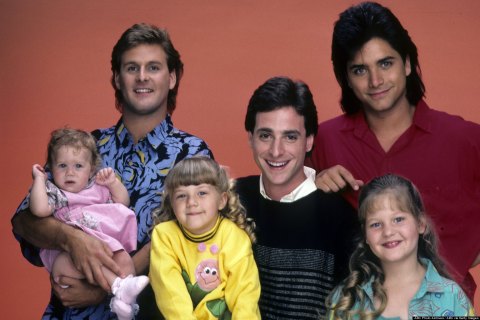 Yes, even Nickelodeon is guilty of churning out accidentally gay programming. Drake & Josh documents the exploits of an odd couple of step brothers. Josh (Josh Peck) is goofy and awkward, Drake (Drake Bell) is your quintessential hipster twink, which somehow makes him a ladies’ man. Maybe it’s just the physical comedy or the fact that it’s about two adolescents as they enter sexual maturity, but the zany antics usually seem like the beginning of straight guy porn. Things got even worse when Josh Peck lost a bunch of weight and we were suddenly watching two hot guys horse around together. Just look at the Volume 1 DVD cover – the two brothers share an embrace. It might be time for another reunion movie. Why not call this one Drake & Josh Get Married (to Each Other)?

Yes, Supernatural is about the relationship between two brothers as they battle their metaphorical demons, which just so happen to be actual demons from hell. However, sometimes this relationship seems a little more biblical than familial. Maybe it’s just because Jensen Ackles and Jared Padalecki are so smokin’ hot, but there’s never really been an ongoing love interest for either of their characters. Writers get outcry from fans any time a female character drives a wedge between the brothers. Fans want to see the brothers together without female distractions. However, this isn’t the gayest relationship on the show. That honor goes to the bond between Dean (Ackles) and the angel Castiel (Misha Collins). Their connection is so strong that Castiel literally went through hell to get Dean back. Let’s not forget about the constant couple’s bickering and bad break ups that always seem to lead to reconciliation. About halfway through the series the writers finally began to catch on how their show was coming across and began to include one-liners mocking this. The show has been on for 9 years and there has yet to be a strong enough female character to dispel the gay rumors.

Before you all jump down our throats about how Matt Bomer sure as shiitake can play straight, take a moment to note that White Collar would be one of the gayest shows on tv regardless of casting. Bomer plays smooth-talking, lady-romancing con-man/FBI informant/cad Neal Caffrey, who works for straight-laced White Collar Division handler Peter Burke, portrayed by Tim DeKay. Peter and Neal team up to bust art thieves, dirty brokers and other elite criminals. Under the shadow of Neal’s absentee father Treat Williams, the relationship between the two is supposed to be read as father/son, mentor/mentee. Sometimes it works, but most of the time the chemistry between Bomer and DeKay gives any sort of father/son relationship an icky feeling. Both characters begin every episode with similar intentions: either catching a bad guy or pulling off some sort of con. However, by the end of every episode their primary goals tend to become saving or protecting each other. At least once per season Peter risks his storied career to keep Neal around (this season even passing on a promotion that would send him to DC, too far away from his number one informant). At the same time, Neal repeatedly risks going back to prison in order to protect Peter’s career. Occasionally they save each other’s lives, leading to discussions over wine (beer in Peter’s case) at Neal’s apartment about how they need each other. While Neal is seen as a lady’s man by the other characters, his relationships either don’t last or aren’t real to begin with. In season 1, his love interest faked her death and betrayed him. Later he dated Hilarie Burton, who, as it turns out, can’t hold onto a gig. Her character left Neal as well. This season **SPOILER ALERT** the love interest turned out to be conning Neal and later revealed herself to be the Big Bad. Perhaps Neal’s relationships would last longer if he wasn’t already involved with a married man. Did we mention Tiffani-Amber Thiessen plays Peter’s wife? If there was ever a top-notch beard, it was Kelly Kapowski. 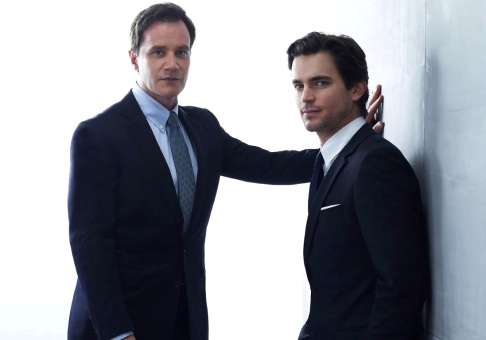 Sherlock is a bit of a head scratcher, often referred to as super gay by non-viewers. One of your writers suggested the show for this list; the other has actually watched it. The show obviously revolves around two best friends, Sherlock Holmes and John Watson, solving crimes. This Sherlock is a celebrity in England and oftened hounded by the British press, so it is no surprise that everyone, including Watson, salivates over and longs to be near him. Watson’s admiration, however, appears to cross the line from friendship whenever it causes him to risk his life to help Sherlock, who is almost always ungrateful or unaware of those who have helped him solve the case. In Series 3 (turn back now if you have not watched it yet!) Watson has finally found a girlfriend, a fiance even, but only in the space of Sherlock’s two-year post-death-faking absence. When Sherlock finally returns, Watson becomes the dependent 50’s housewife, angry over his partner’s leaving, but overjoyed inside at his return. Sherlock, who is decidely asexual, only once dating a woman so that he could get closer to her evil-doing boss, not only returns to put the pieces of Watson’s heart back together, but to reveal that his female fiance is, in fact, an asassin merely using Watson to get close to that same evil-doing boss. By series’ end Watson is indeed married, but clearly longs to return to his former shared (one-bedroom?) flat at 221B Baker Street. Sherlock, a savant who lacks an understanding of human emotions, remains blissfully single under the care of Una Stubbs’ effervescent fag hag Mrs. Hudson.

Quick, Watson, I’ll race you to the bedroom!

Rizzoli and Isles, or Rizzles, as it’s known to lesbian viewers, has been teasing us since its inception. Angie Harmon and Sasha Alexander portray Jane Rizzoli and Maura Isles, respectively, a hot cop and forensic genius who team up to solve Boston’s murders. The show plays like pretty much every other police procedural ever, with our buddy heroes solving one crime per week. When they’re not solving crime, however, our leading ladies are constantly popping up in each other’s apartment at unusual hours for “buddies.” How many times does an episode have to start with a bed-headed Jane making coffee in Maura’s kitchen? How many times must the ladies arrive at the precinct in the same vehicle under the guise of “carpooling?” How many pillow talk scenes can the writers really expect to sneak in before viewers demand that they fill in the blanks? Jane’s boyfriend is conveniently married to the military and more often than not deployed overseas, and while Maura sympathizes, she doesn’t seem to mind taking up any and all of Jane’s free time. Jane’s mother, played by the underemployed Lorraine Bracco, even lives in Maura’s guest house. There’s a term they use to describe the person who lives in your guest apartment, and I believe it’s mother-in-law. This show is so gay, in fact, that LGBT recappers extraordinaire After Ellen publish a “lesbian subtext” recap alongside their recaps of actual “out” shows like Glee and Black Sails. Check out the dykedome when Rizzoli and Isles returns to TNT from hiatus on February 25th.

The above shot is used so frequently we can’t even tell what episode it’s from.