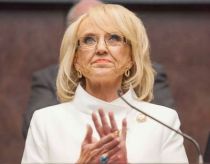 After complaints from all over the state and all over the nation, Governor Jan Brewer decided yesterday to publicly announce she was vetoing bill SB 1062.

According to the New York Times, one of the final actions that seemed to help SB 1062 get vetoed were petitions against it containing 63,000 signatures brought to the Arizona Capitol building by the Human Rights Campaign.  Most believed she would not allow the bill to pass, and one of her final statements on vetoing it was that the bill is “broadly worded and could result in unintended and negative consequences.” This is entirely true and, though many of its supporters argued that allowing discrimination was not the intent of the bill, that’s exactly what the bill would have allowed religious business owners to do.

The New York Times also stated that by vetoing the bill Brewer gained a lot of support not only from local businesses and citizens, but also from Mitt Romney, former secretary of state Hillary Rodham Clinton, and senator John McCain. She gained some friends and some enemies. Many conservatives and Christians are very upset that she didn’t allow the bill to pass, but that’s probably because they have no idea what discrimination feels like.

The LGBT community definitely deserves this good news after the amount of controversial bills, bans, and obstacles that they have had to endure recently.