Reid Ewing, who most people know from playing Haley’s boyfriend on Modern Family, outed himself on Saturday via Twitter. The actor recently penned an essay for the Huffington Post on body dysmorphic disorder (BDD).

In the essay, he discusses how he underwent several cosmetic procedures as a result of his body dsymorphic disorder, but wishes he hadn’t. The actor first had cosmetic surgery in 2008 at age 19.

“Before seeking to change your face, you should question whether it is your mind that needs fixing,” he writes in his essay.

Two days later, on November 21st, Ewing tweeted about the looks of Eugene Bata, who appeared on Good Morning America for a segment on body dysmorphic disorder.

One of Ewing’s Twitter followers immediately called him out on the statement and asked if Ewing had, in fact, outed himself. Ewing’s response was pretty perfect. 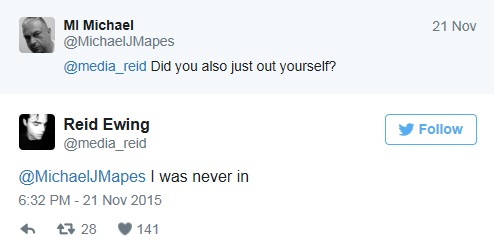 If that statement is too ambiguous for you, Ewing’s next tweet should clear up any confusion.

Unfortunately, it seems like Ewing’s character has just about run its course on Modern Family. However, coming out should definitely get him a few more gigs. It’s 2015, people. Coming out gets you more work than it costs you.

Welcome to the club, Reid!