“Coming out” is defined as the process of recognizing, accepting, and sharing with others your sexual orientation or gender identity. It can also refer to the time when a person comes out to themselves.

Since the LGBTQ Community is often looked down upon, this process can be very hard to do. If someone you know comes out to you, there are good and bad ways to react. Here’s some advice on what to do to not offend or make the person uncomfortable.

Coming out is a very hard process for many LGBTQ members. Conversations may be short or long. It may be as simple as, “I wanted to tell you I’m …” or it may be a long story. Be sure to listen with attentiveness to let the individual express themselves freely.

Expressing your sexual orientation or gender identity is often very personal. While the individual may not say “this is between us” it is best to assume they want to keep it confidential. If you really want to share it with others, try asking the individual if they mind. They may want you to not tell anyone, or they may very well not mind in the effort to meet other members of the LGBTQ community.

A person’s sexual orientation and gender identity is individual and only that person knows it. Don’t bombard them with questions like, “Are you sure?” or “How do you know?” or “Have you even been with anyone?”

If you’re close with this friend, these may be conversations you have in the future, at their expense, but it is not your place to ask in the same moment of them coming out to you.

In order to make them feel comfortable, don’t reply with statements like, “Wow, I had no idea!” You can express your feelings calmly, but certainly keep your tone of voice at the personal level as they probably did when they came out to you. 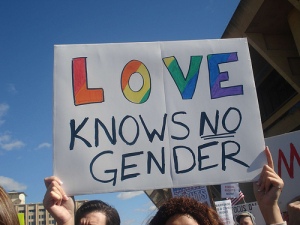 For many people, the LGBTQ Community is very new territory, filled with identities and information they never knew existed. You should take your friend’s coming out as part of the LGBTQ community as the motivation to learn more.

Now, I can’t tell you to support the LGBTQ community. I’m not going to tell you what to believe or not believe. However, in the effort to make them feel comfortable, whether you do or don’t support, in the moment, don’t just walk away. You may personally choose to not associate with them because of their identity, but don’t disclose that in the same conversation.

I advise you not to betray your friendship over their identity, but those actions are your choice. But cutting them off also translates to the actual conversation. Don’t say things like, “Wait, are you coming out to me?” Let the individual finish and listen to them.

Maybe you already kind of knew of their identity so you find it kind of funny that they have made it into a personal conversation. While this is valid, the individual wants to share it with you, which may be very difficult, and you should respect that. Don’t laugh, as it may be simply seen as you laughing at their identity.

If you’re not familiar with the LGBTQ community, it can be a little overwhelming for someone to come out to you, especially with an identity you may not know much about. I hope this helps you with knowing what to do and not to do if someone comes out to you as a member of the LGBTQ community.

Like Loading...
« The Rainbow Room: 6 Facts About the LGBTQ Center
5 Ways Straight Women Can Be Better Allies to Queer Women »