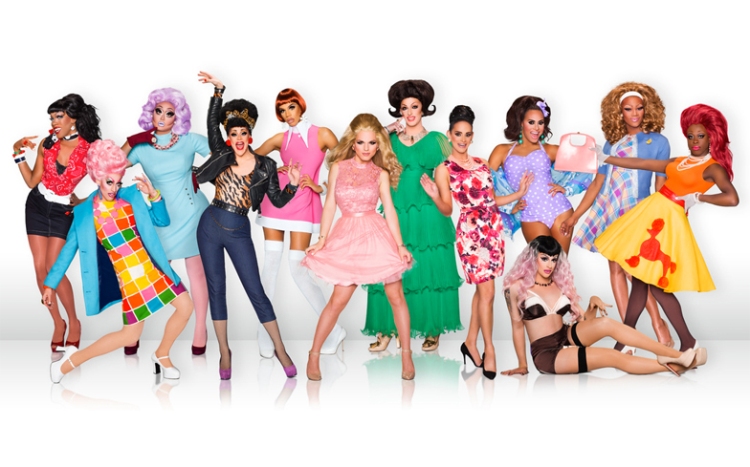 Update: This piece was originally published on March 8, 2016 and has been updated to include GTSA’s RPDR Power [Bottom] Rankings for Week 1. Scroll down to see who your editors think have the charisma, uniqueness, nerve and talent to capture the checkered flag!

Original: RuPaul’s Drag Race is back for an 8th Season, and this was an extra special premiere as it also marks the show’s 100th episode. The episode was oversized and double stuffed, so let’s get right down to it.

The first queen to enter the workroom is 21 year-old Naomi Smalls, whose name is inspired by Naomi Campbell and Biggie Smalls, the combination clearly influencing her drag persona. Next up is Cynthia Lee Fontaine, a simple-minded queen. Dax ExclamationPoint is the third to arrive, dressed like Storm’s stunt double. Naysha Lopez is fashionable and vain… and that’s about the extent of her personality. Acid Betty, one of several New York queens this season, is 37 and describes her style as trippy and bitchy. Robbie Turner is a 33 year-old adorable nerd who goes classic Hollywood when in drag. Kim Chi, 27, is from Chicago and clearly inspired by anime. Thorgy Thor is a 31 year-old high energy fashion clown from Brooklyn. Bob the Drag Queen, also from Brooklyn, is a bit sloppier than the other queens, but makes up for it in charm. Laila McQueen, 22, is a self-described gothy rock star, which really just means she’s dressed in an old Beetlejuice Halloween costume. Chi Chi DeVayne, 29, walks in wearing a trash bag and proudly calls herself a “cheap queen”. Derrick Barry is a successful Britney impersonator from Las Vegas who seems a bit high maintenance a la Willem. 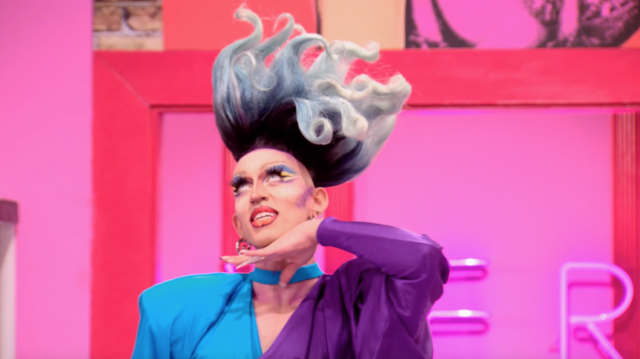 All of the past Drag Race winners (less Bianca) return for this week’s mini challenge. The queens will need to pose in a group shot and they have to stand out amongst the past winners. This is where we find out Robbie and Jinkx Monsoon are drag sisters. Chad Michaels describes Kim Chi as “Jujubee on steroids.” Thorgy struggles to go “bigger” under Ru’s instruction. Laila is completely awkward, clearly intimidated by the past winners. Derrick is great – but totally (just) Britney. 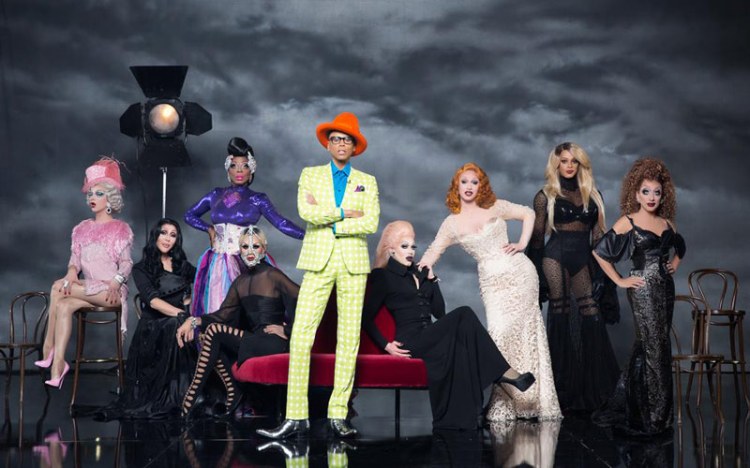 Bianca must have been photoshopped in, because she was MIA during the Season 8 premiere.

After everyone is out of drag, the maxi challenge is revealed. The queens will have to recreate looks from past challenges throughout Drag Race’s past 7 seasons. Morgan McMichaels shows up to announce the winner. Robbie Turner gets to decide which look each queen will have to recreate. The only problem is he forgets to give himself a good look to recreate and ends up stuck with Sharon Needles’ poodle look.

Many of the queens struggle to reach the level of the looks they’re trying to recreate. As they work, even the queens who have decent looking garments pale in comparison to the original looks.

Nicole Richie is this week’s guest judge. As the queens strut their stuff on the runway, we start to get a sense of the greats, the okays, and the terribles. Ultimately, Cynthia Lee Fontaine, Dax ExclamationPoint, Thorgy Thor, Bob the Drag Queen, and Chi Chi DeVayne are safe, but we all know safe isn’t something a queen should aspire to.

Acid Betty is the first called to safety. Dressed as a drag furry, Kim Chi is the winner of this week’s challenge. Derrick Barry is safe and so is Naomi Smalls. Naysha is up for elimination, and since I keep having a hard time putting a face to her name, it’s not looking good for her. Despite a sloppy look, Robbie Turner is safe until next week. With a post-apocalyptic look that looks more like a Beyoncé Super Bowl costume, Laila McQueen is also up for elimination.

Laila and Naysha battle it out while lip syncing Lady Gaga’s “Applause”. Both start out pretty week, but it quickly becomes clear that Laila has no intention of going home this early. Naysha is concerned with looking pretty and Laila gives herself up to the performance. In the end, Laila stays and Naysha has to sashay away.

The surviving queens will be put to the test again this week. When Ru asks if she can get an “amen”, they answer with the most unenthusiastic “amen” in Drag Race history. Somehow, this is fitting for an underwhelming 100th episode. I expect the queens and Ru to step it up next week. 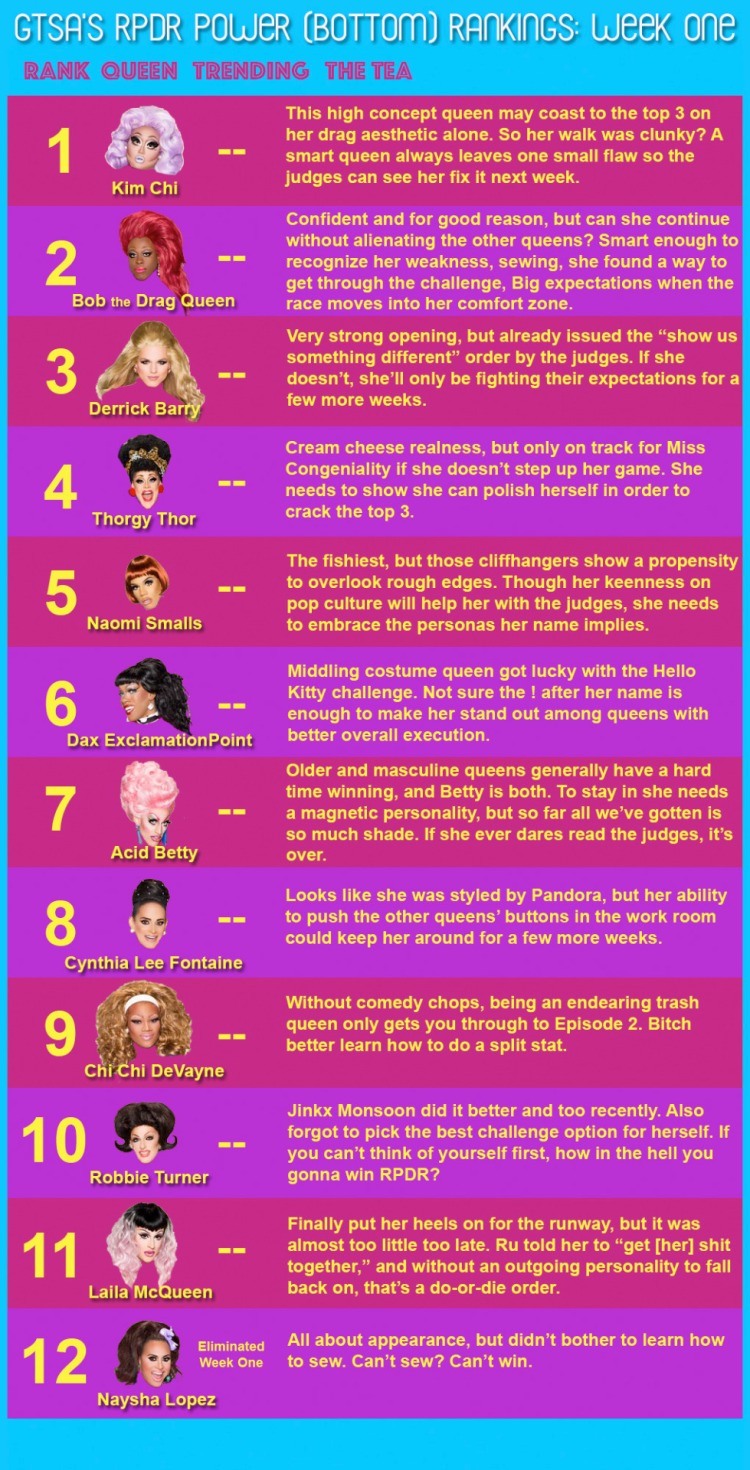