In “Bitch Perfect”, Episode 2 of the RuPaul’s Drag Race Season 8, we start to get a sense of which queens are talented and which rest on pretty.

Back in the workroom, after Naysha’s not-so-surprising elimination, Robbie Turner is feeling the pressure. Cynthia Lee Fontaine is shocked at Naysha’s elimination, which has to make you wonder if Cynthia fell off the short bus. After being in the bottom two, Laila McQueen is feeling threatened by creative queens Thorgy Thor and Kim Chi. She also doesn’t think Naomi Smalls has any business being in the competition,  yet somehow thinks there’s still a place for herself. In turn, Naomi refers to Laila as “entourage”. Burn!

This week’s mini challenge has the queens dancing to “Cha Cha Bitch.” Putting the acid in Acid Betty, Betty talks smack about Thorgy’s “hairy” reputation and by reputation she means legs. Thorgy makes the hair work for her as she transforms herself into an over-the-top Frida Kahlo (but gurl, you better get a razor, stat!). Bob the Drag Queen channels her inner Salt N Pepa for the dance challenge. Chi Chi DeVayne is surprisingly great and Kim Chi is a hot mess with no rhythm. Ru gives a special shout out to Thorgy for the Frida Kahlo realness, but it’s Chi Chi DeVayne and Cynthia Lee Fontaine who are the winners.

For this week’s maxi challenge, the queens are being split up into two teams for an all lip-syncing, all dancing extravaganza. Jamal Sims, who’s worked with Miley Cyrus, Madonna and J-Lo, will choreograph the queens as they face off against each other in “Bitch Perfect”, inspired by the a cappella battles in Pitch Perfect (duh!).

Chi Chi is the leader of Team Shady Bitches. Acid Betty, Thorgy Thor, Naomi Smalls, and Dax ExclamationPoint round out the team. During rehearsals, Betty is being a bitch, which is quickly becoming par for the course. Thorgy says no one in New York ever wants to work with Betty because of her attitude. Chi Chi wants the girls to stick to the dance routine, but Thorgy insists on injecting some comedy into the bit. Jamal actually likes the comedy and, much to Chi Chi’s chagrin, wants to keep Thorgy’s bit. Dax acts like a diva around Jamal, and not an awesome, inspiring diva, but an annoying has-been diva (or in Dax’s case, never-was). The team has a lot of work to do, but Jamal whips them into shape.

Cynthia Lee Fontaine is the leader of Team Lady Bitches. Bob the Drag Queen, Derrick Barry, Robbie Turner, Kim Chi and Laila McQueen comprise the rest of the team. Kim Chi has never even heard of Pitch Perfect, never a good sign. Rightfully so, Laila is worried that she’ll fade into the background. Ru tells Laila she needs a strategy if she’s going to stay in the competition. Laila insists she just needs to work on projecting her personality, but Ru seems unconvinced. Kim Chi is an absolute trainwreck in rehearsals, and Laila isn’t much better, but Jamal does his best to help.

While getting into drag, the queens bond over the fat history many of them share – which is the first time it becomes obvious that there aren’t any plus-sized queens this season. We get to see a scary picture of Acid Betty before she lost weight, but somehow chunky Betty is less scary than lean Betty (maybe it’s time to eat a few cheeseburgers?). The queens try to encourage each other (for once) and this is when Kim Chi reveals she is still a virgin (gasp!).

The Pitch Battle itself actually turns out pretty awesome. Both teams manage to pull it together for a performance that is both cohesive and hilarious. Kim Chi, despite being a horrible dancer, manages to stand out for good reasons. Her personality really shines. Naomi is probably the fishiest of the bunch, but so far that’s all Naomi has brought to the table. Ester Dean from Pitch Perfect is, appropriately, this week’s guest judge.

The theme for this week’s runway is Movie Premiere Realness. Cynthia Lee Fontaine is first up in a look she says was inspired by Eva Longoria, but Ru appropriately deems it more Valerie Harper. Bob the Drag Queen dons a simple, but elegant black dress. Derrick Barry proves he can do Ann Margret in addition to Britney. Dressed in a green wig, Laila McQueen says she’s going for classy, but the only thing her look says is “Party City.” With a theme in his wheelhouse, Robbie Turner embodies classic Hollywood. The judge’s respond well to Kim Chi’s ghostly look, calling her “Anime West”, but she looks more like Jujubee sleepwalking down the runway. Chi Chi DeVayne goes with a red gown and that’s really all there is to say about her. Snoozefest. Naomi goes for a super sexy and super revealing black dress. She gives great body, but she’s already given us that. Acid Betty goes high fashion in a couture skin-colored gown. Dax ExclamationPoint struts her stuff in a bluesy dress. In an effort to stand out amongst all of the gowns on the runway, Thorgy Thor opts for a sequined jumpsuit and Diana Ross wig. 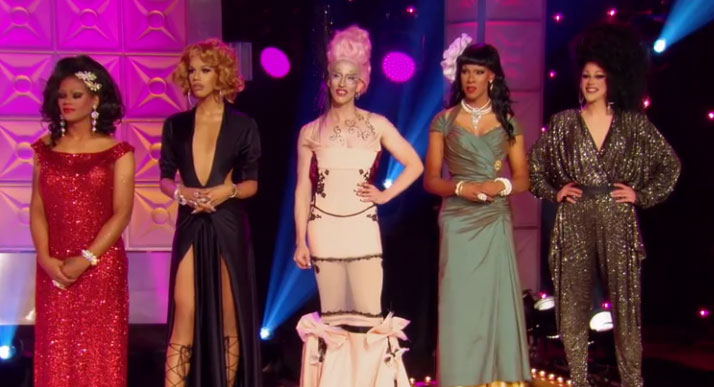 Bob the Drag Queen, Cynthia Lee Fontaine, Naomi Smalls, Robbie Turner, and Derrick Barry are all safe. They’re going to need to pull out all the stops if they want to impress the judges next week.

The judges want Kim Chi to show MORE personality, but they are generally pleased with her performance this week. The judges heap praise on Acid Betty’s runway look, even if some have minor issues with it. Chi Chi DeVayne is recognized for her leadership in the maxi challenge and overall performance. Michelle Visage calls out Thorgy Thor for heavy eye makeup, but isn’t that like Paris Hilton yelling at Lindsay Lohan to put on underwear? They try to be nice to Dax ExclamationPoint at first, but quickly tear into her for her lackluster performance and dreadful hemline. The judges admit that Laila has improved from last week, but not enough to be on the same level as the other queens.

Thorgy Thor is the first queen called to safety. Chi Chi DeVayne is announced as the winner. Acid Betty is also safe. Dax ExclamationPoint and Laila McQueen are both up for elimination, which means Kim Chi is safe. Dax and Laila have to lip sync to a true classic – Gloria Gaynor’s “I Will Survive”. You would think they were lip syncing to some current pop hit. A legendary song like “I Will Survive” demands a queen give 110% and both of these queens only muster up about 45%. In a surprise move, RuPaul says they both failed the lip sync challenge and sends them both home (thank god).