The queens are starting to feel the heat in Episode 4 of Season 8. Naysha is sad that Cynthia was eliminated. Robbie is feeling shaken from having to lip sync for her life. The queens take a moment to talk to Derrick about the judges’ critique that they wanted to see her soul. At first Derrick takes this to mean they think she doesn’t have a soul, but then decides that twerking should be enough to convince them.

There is no mini challenge this week. Instead, we jump right into the maxi challenge. The queens are going to be performing as musical groups and need to embody different genres of music. Team NY (Bob, Betty, and Thorgy) choose Party as their musical genre. Kim Chi, Robbie, and Naomi decide to go with Punk, which leaves Naysha, Chi Chi, and Derrick with Synth.

Thorgy does not get off to a good start with her team, annoying them by being too critical of their suggestions without offering any other suggestions. Thorgy is a classically trained violinist and knows a thing or two about music, so she isn’t willing to settle in this challenge. In turn, Thorgy is mad that Bob won the last challenge, and refers to herself as the Susan Lucci of the competition.

Kim Chi, Robbie, and Naomi struggle during rehearsals, but at least they seem to be working together reasonably well. Derrick, Naysha, and Chi Chi are not as fortunate. They can’t even all agree on what Synth is. Chi Chi wants them all to wear cut outs of shapes and Derrick refuses to walk out in a cardboard box.

After some coaching from Lucian Piane (yum), the queens are ready to perform. First up is Bob, Thorgy, and Betty as “Street Meats”. Despite their tension during rehearsals, the group’s performance is pretty solid. The song is funny and they seem to be having fun while performing, which is fitting for the Party genre. Next up is Naysha, Derrick, and Chi Chi as “Dragometry”. There really isn’t anything good to say about this performance except that it could have been even worse based on the team’s rehearsals. The energy is off and the humor just isn’t there. Last to go is Robbie, Naomi, and Kim Chi as the “Chicken Wings”. Robbie is a revelation in the challenge and frankly, anything less would send her packing. Overall, the last group has the most energy and is also the most fun to watch.

This week’s runway theme is Neon Queen Realness. Bob thinks outside the box and walks out without a wig and neon paint dripping down her forehead. It sounds weird, but it’s a good thing. Betty struts down the runway dressed like a Lisa Frank portrait of the Creature from the Black Lagoon. Thorgy dons a neon frock, but her overall look is just slightly sloppy.

Robbie Turner is the rightful winner of this week’s maxi challenge. Kim Chi and Naomi are also safe. Bob apologizes to the judges for his behavior during rehearsals and it seems to be genuine. Once again, the judges tell Derrick Barry they feel like she isn’t giving 100%. The judges are pleased with Thorgy Thor’s performance, but Michelle Visage isn’t a fan of her runway look. Naysha got lost in her group’s performance. Chi Chi complains about her team instead of owning her mistakes. Bob the Drag Queen, Thorgy Thor, Acid Betty, and Derrick Barry are all safe. 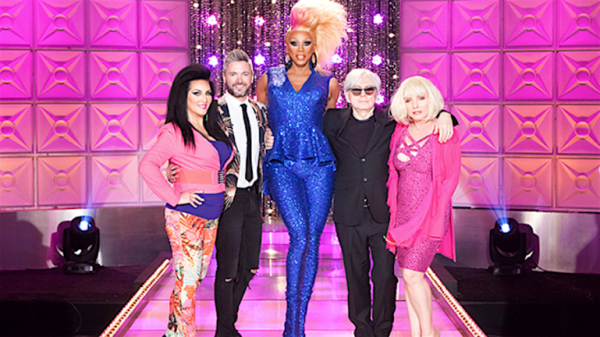 Chi Chi DeVayne and Naysha Lopez have to battle it out to Blondie’s “Call Me” in front of guest judge Debbie Harry. The lip sync starts out weak. Both queens are putting energy into the performance, but they don’t seem to understand the energy behind the song. Prancing around like a pretty girl doesn’t work when you’re lip synching to Blondie. Toward the end of the performance, Chi Chi pulls out all the stops and saves herself. She stays and Naysha has to sashay away… again. Overall, it was a pretty forgettable episode. The queens are going to turn it out next week if they’re going to be as memorable as previous casts.